Trust in the Lord with all of your heart and lean not undo your own understanding. Proverbs 3:5 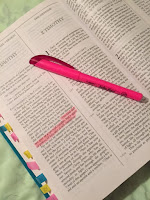 So as I started to say.....it all started with a baked potato so here is the rest of the story.  Earlier this afternoon I had been out running some errands and a little shopping.  I found myself getting pretty hungry so I pulled into a bbq place and got a baked potato with the toppings to go.  To roll back before the stopping to get a potato (I know it is confusing but just follow me down the path) at that intersection before the place to eat I notice a older homeless gentleman in blue jeans, a very faded purple shirt and a cane.  I think we have all been there and know that he was waiting for someone to help him with money or food.  So I took a mental note then kept on to my destination.  My stomach was growling and I ordered my food.  Was going to sit in the car and eat it but decided to just take it back home.  As I pulled out of the restaurant I heard a voice give the man your food.  I knew it would be challenging to get it to him from where I was but I said okay God you want me to do it then I will.

I have heard that voice many times (I can't explain as it was not audible but more like a gut feeling voice if that makes sense) and know I am to do exactly what that voice says.   I know, as a Christian, that voice is God and I am to obey it.  There have also been many times that I have not listened to it and the result was not pretty.  Either someone needed a friend to just talk to at that moment they were put on my mind and I did not "make the time to text or call, or a loved one needed you to be there but because of "life" it was not a priority.  I could go on all day about things "coincidences" (which I know are not the case because NOTHING with God is a coincidence) that happen in my life but I know they are simply God.

Now back to my story.....as I drove past that area I knew I could not get to him to give him the food from that side of the road.  He had started walking off to another location.  I had to go through a light, take a service road for a mile and then take the turn about back down the other side of the service road back the mile I just came from on the other side to get to the area he was at.  I took the turn about under the bridge hoping I would see him.  To my surprise he was standing right there back to me.  I immediately pulled over as far as I could,  put on my hazards, rolled down the window (said a slight prayer that no one would zip around the corner and hit me) and said excuse me sir....he turned around.   I said here is some food for you my friend.  He took the food in one hand and reach over with the other.  He took my hand so firmly and said, "May Jesus Be With You."  He had the most beautiful blue eyes and skin that had seen some rough days.  I said thank you sir and he responded, "May God Bless You."  He (and I am so mad I did not ask him his name) then said I am a vet two times over and I have slit many throats.  All of the sudden a fear came over me that made me second guess being a single female stopping under a bridge and how quickly it have gone a different way.  I told him I hoped this helped him and thanked him for his service.  He just kept saying God Bless You as he turned away.  I rolled up the window and drove off.  As I drove off I was so mad that I let fear overcome me.  I knew God told me to give this man my food and that whatever happened God had a plan.  I wrestled all the way home with that telling myself God did not give us a spirit of fear.  It says that in 2 Timothy 1:7 but in that moment satan took the opportunity to jump in and try to rob something that I was supposed to do.

From that I have sat and thought about this man for a couple of hours....I can see his beautiful eyes and his tattered aged skin.  I can feel his hand shake and I am daunted by the words I am a two time vet and I have slit many throats.  I don't know if that is a true statement or not but I can't help think if it is what this poor man has seen in his lifetime.  What dreams does he have, does he even sleep due to nightmares but more importantly how did he get there.  I can't help but think he could be someone's dad, brother, uncle etc.  I find myself hurting for him.  If he is a vet we as americans have failed him along with so many others. (Now not to start ANY political mud slinging but those are my thoughts....we as americans have failed him/our vets.)  I have recently moved back by my dad and I can't imagine the thought of him going through that, living on the streets, people not given him a second glance or helping him because of him being "fake homeless" and the not knowing what had happened to him.   Maybe the man chooses to be homeless or maybe he doesn't have a choice at all.

I often hear people say that homeless person begging may not be homeless and faking it, they will just use the money on drugs or the money on drinking.  What I say to them is that is it not our place to judge what they do with the money.   If I was a two time vet or that might have nightmares, open sores, abscessed teeth with no way to get dental care, maybe watched a family member get killed (those are just a few examples that I could think about on a list that could go on forever) etc...I would probably be in the same boat of drinking or do drugs to dull the pain both mentally and physically.  Sometimes I think they are put there to see if we obey God's prompting to help others.  Maybe it is a real person or one of his many angels in disguise but either way we are told to help others.  To be the hands and feet of Christ.

I truly pray that I see that man again because if I have the opportunity when I am around, each time I will make sure he at least has food for his belly to be full and liquid to keep him hydrated.   I wished I had something to drink in my car to offer him.  It is hot here in Texas but thankfully today it was overcast and it rained.  I hope he stayed cool, fully belly and dry under that bridge.

Lesson learned today.....always follow that voice (gut intuition) if you are told to do something.  You plant a seed.......a seed you may never see the harvest on but you know you were being Jesus's hands and feet in that moment.  Never let fear stop you if God is leading you.  If he brings you to it.....he will bring you through it.   God did not give us a spirit of fear.